What a feeling!! . . .driving on a two lane highway in the heart of the **Boreal Forest in Northwestern Ontario, Canada with a carload of art!!!

It’s about a 200km drive one way and most of it I felt as if I were being hugged by huge snow brushed trees and gigantic boulders on either side. My destination: The Pictograph Gallery, Atikokan, Ontario. I was invited to display my works at the gallery from January 5 to February 16, 2019. The solo exhibition (77 works) is titled: GEOMETRIC ABSTRACTIONS – Common Elements: lines, shapes & colours. 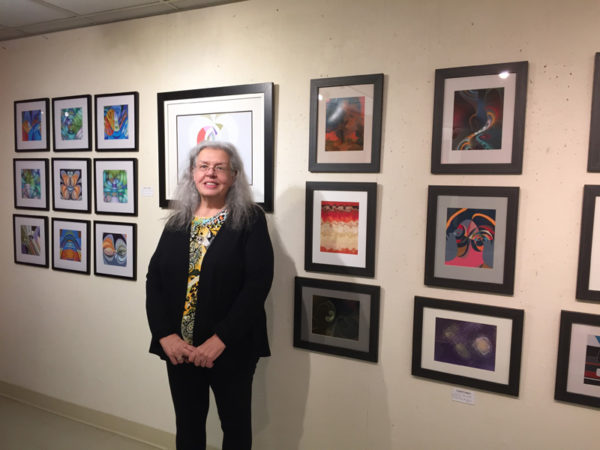 I would like to extend a BIG expression of thanks and gratitude to Janice Matichuk (a local artist, Park Ranger at Quetico Provincial Park & board member of the Pictograph Gallery) who’s keen eye, and meticulous sense of colour was used to hang my works. It took my breath away! My sincere thanks Janice!!

I would also like to acknowledge funding support from the Ontario Arts Council, an agency of the Government of Ontario. (Exhibition Assistance & Accessibility Grant)

**[The Boreal Forest plays an iconic role in Canada’s history, economic & social development and the arts. Canada’s Boreal Forest is also considered to be the largest intact forest on earth, with around three million square kilometres still undisturbed by roads, cities and industrial development.]